What language do you speak?

Have a look at this interesting proportional map of the world’s largest languages: 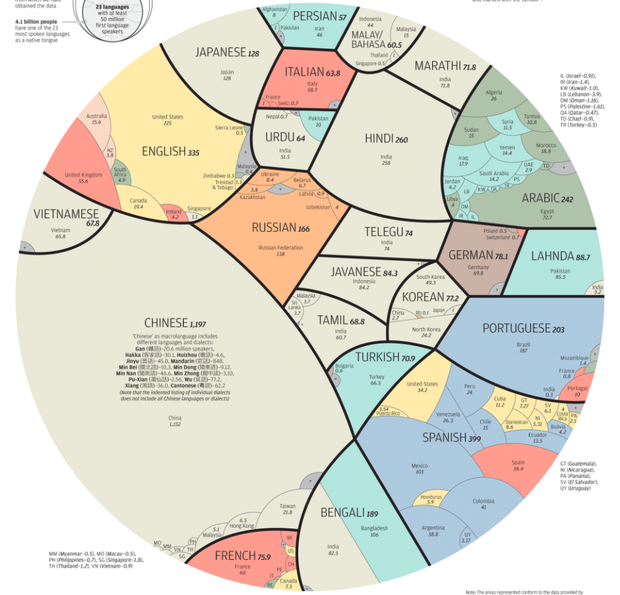 hink about it, what language should you study next? Read the original article to find out more about the world’s languages here.

“The problems of living beyond our means are not just environmental, however. To boost our economic output quickly enough, to satisfy the needs of big business, to create more jobs and to provide for the eight million people who are added to the global population every month, we have used an economic model that runs on steroids – and the drug it needs is debt. The mountains of debt we have created in the last 30 years were the cause of the 2008 financial crisis. Because this economic model also rewards the rich more than the poor, the system has resulted in widening inequalities. Global inequality in much of the rich world today is higher than it was in 1820, at the start of the Industrial Revolution. The gap between the rich world and the poor world is also much wider.”

Interview with Graeme Maxton, Seceretary General of the Club of Rome

The international flag of Earth

A designer in Sweden has made us all a flag for Earth. An Earth flag! It’s a pretty nifty start to world peace, I think. What do you think?

It’s made specifically to look awesome in space:

The international flag of Earth might be the very first flag we have that doesn’t pit any of us against each other. A flag that doesn’t mean US versus THEM, but a flag that’s a pure celebration of us. Earthlings. Together.

And here is an explenation from its designer on its meanings:

We are all Immigrants

Posted on May 27, 2015 by admin
Whenever you have the next conversation about migration, think about it: We were all immigrants at some point….

This animated map shows how humans migrated across the globe.

Open the post in order to watch the animated movie.

How to end poverty…

Is this good news? Are we about to end poverty within the next 15 years? Check out this graph and decide for yourself:

Fact is, that poverty is one of the biggest challenge for humanity and fact is that we immediately have to act in order to change something. By ending global poverty we will also fight other global crisis that are interconnected with poverty, such as: unemployment, environmental issues, violence or the financial crisis, etc.. So, let’s work all together now on that vision to get rid of poverty by 2030!

How to win every climate argument

This flowchart will help you to win avery climat argument you might get involved, talking to people about climate change:

What do you think? Did it help you?

They said it would take everyone to change everything — and everyone came.

While the leaders of the world came to New York to debate, 400’000 People marched in the streets of New York for a change in our global climate policy. Many thousends more joind this ‘climat march’ all over the globe to give some weight to the urgency of this matter! What do you think, did they made an impression to the world leaders?

Climate change is a security issue

The UN Climate Summit is warning about the current emergency and there are a lot of people calling for action. Even Leonardo DiCaprio (UN Messenger of Peace) talked about the climate change as a security issue – Another great speach at the opening of Climate Summit 2014!

Gender eqality is an issue for man and women and man are now officially invited to join the movement. Gender equalit is not about thinking that men and women are the same. It is about giving all human beings the same opportunities and to keep all of them away from the same risks. And most important: Feminism is not about heating man! – Great speach by Emma Watson to the UN

6 Lessons travel teaches you that college never will

And this is why you should go out and explore the world: Traveling will teach you more than you could ever learn in theorie:

1) You are capable of more than you’ve ever imagined.
2) People are fundamentally good.
3) You are but a tiny blip on a giant radar.
4) Stereotypes are ridiculous.
5) The world is not a dangerous place.
6) One person can make a difference.

What do you think about that? If you would like to know a little bit more about this, you should read the whole blog of Ryan O’Rourke here.